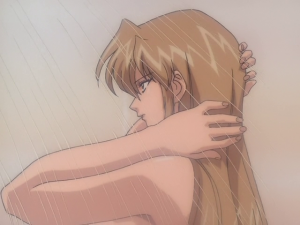 At night in Aika Sumeragi's trailer, she is seen taking a Shower panning from her buttocks all the way up to her head where she has her eyes closed and hands on her hair. She then opens her eyes and puts her hand out to turn the shower off. She comes out of the bathroom wearing a Pink Towel and then sits on her bed with her legs crossed. She then gets up and opens her closet where she goes up to the ultranate golden bustier in there and then drops her towel as the screen fades to black.

The scene first appeared in the first episode of the OVA's release on April 25th, 1997 in Japan.

The part where its panning up Aika's body appears in the recap special Agent Aika: Moving Out released on May 25th, 1998 during a moment where the events of the first half of the series are put together like a movie trailer.