Adventures of Kotetsu (小鉄の大冒険 Kotetsu no Daibōken) was a manga series by Minoru Tachikawa that was adapted into a 2 episode ova series.

The series was created by Minoru Tachikawa from the manga series that was serialized in Wani Magazine in 1992 and lasted through 2001. In 1996 an anime OVA series from the studio Daia and directed by Yuji Moriyama started on December 13th but only lasted for two episodes ending on January 10th, 1997. A light novel named Adventures of Kotetsu: Come home, Linn-chan! by Moritami Yowo was made in July 1997 and was published by KSS.

Linn Suzuki flees Deep Kyoto from her cruel mistress Oni Azami and travels to Tokyo to find her long lost brother, who was last seen working for the Kuon Detective Agency. By chance, a stranger happens to be Miho Kuon and lets Linn stay with her nicknaming her Kotetsu. However, a mysterious agency called the Syndicate are after Miho and Linn. 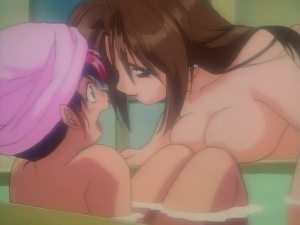 Kotetsu and an Imposter Miho Kuon in the bath

Linn Suzuki has a bath while wearing a Towel on her head in Miho Kuon's apartment. An imposter version of Miho Kuon comes into the bathroom wearing only a bra and panties and starts Stripping then gets into the bathtub with her. In the tub, the imposter gets uncomfortably close to Kotetsu and attempts to drown her. While under the water, Kotetsu breaks the tub where she and the imposter fly out of the bathroom naked and began to fight. Kotetsu gets a pink Towel on and takes the fight outside as they fall out of the apartment window. Outside they have a Rain Shower as they fight with swords. 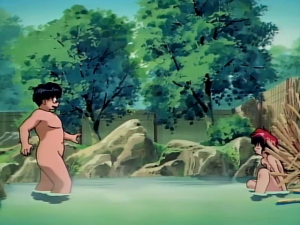 Kotetsu after crashing into the males side of the onsen

At some point in the novel there is an illustration of a Furo scene where Linn Suzuki gets her back scrubbed by Tobiume.