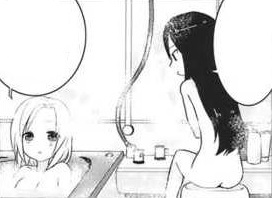 A Channel chapter 3 is the first bathing scene in the A Channel manga series.

While baking, Run Momoki accidentally gets Yuuko Nishi Filthy by spilling the batter in her hair and feels guilty and spills it in her own hair to make up for it. Both of them have a Furo session to clean off with Run in the Bath while Yuuko sits on a Bath Stool. Yuuko then walks out of the Ofuro wearing a White Towel.

This chapter first released in Japan sometime in 2008 and was compiled into the first manga volume.

This chapter's bath scene gets adapted into the ninth episode of the A Channel anime series. In the anime version, Yuuko is seen using the Shower and turning it off. Run's Unit Bathtub was changed into a Drop-In Bathtub and the bathwater is revealed to be green. Yuuko's hair is also extended in the anime adaptation and covers her butt crack.