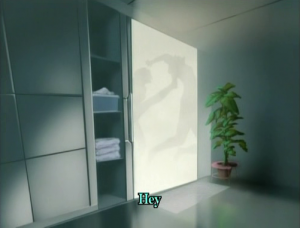 6 Angels episode 6 is the only bathing scene in the 6 Angels series as well as the last episode.

Near the end during the stories aftermath, Doris Nicholas is seen taking a Shower back at the Guard of Rose hideout. While she has her eyes closed and relaxed, she hears JC's voice then opens her eyes to see that he is standing there clothed in the shower with her Peeping. Doris calmly asks him if he is a ghost right now which he says no. Doris then gets mad and starts beating him up cutting over to outside the shower door showing silhouettes of her beating him up such as kicking him and uppercutting him.

The scene was first streamed online in Japan on July 6th, 2002.