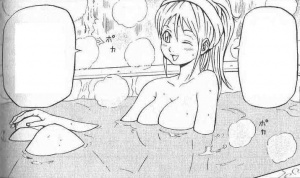 Ponzu takes a Bath in front of Cross in the command room washing her arm while wearing a Towel Headband and then stands up right in front of him.

"I would die if I don't bathe twice a day"
~Ponzu

This chapter was first released in Monthly Shonen Gangan before June 22nd, 2005 which is when it was compiled into the 11th manga volume that was later released in North America on August 12th, 2008.