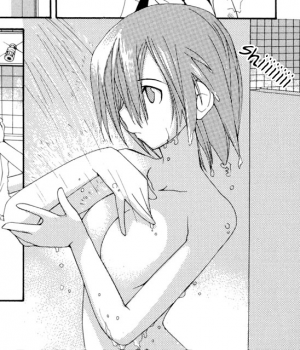 14 Juicy chapter 7 is a bathing scene in the 14 Juicy manga series.

Reiko Yuuki takes a Shower in a Shower Room's Shower Stall after getting Filthy from playing soccer. After getting out and drying her hair with a White Towel, she encounters Haruna Misakura Stripping to take a shower Off Screen.

This chapter was first released in Japan in Young Animal Arashi sometime before October 27th, 2006 which was when it was compiled into the first manga volume.