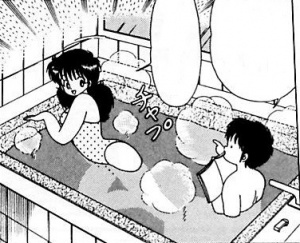 1+2=Paradise chapter 20 is the tenth and final bathing scene in the 1+2=Paradise manga series.

There is a Mixed Bathing scene in a Drop-In Bathtub.

This chapter was compiled into the fifth volume. The original serialization of the chapter in Monthly Shonen Magazine was released sometime before November 6th, 1990.