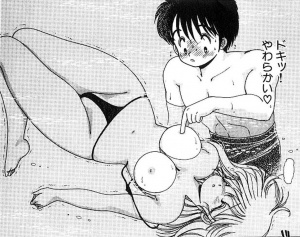 Yuka Nakamura ends up Skinny Dipping in a Swimming Pool when her Swimsuit top breaks.

This chapter was compiled into the fourth volume which was released during June 1990, the original serialization of the chapter in Monthly Shonen Magazine was released sometime before it.