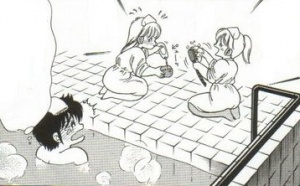 There is a flashback of Rika Nakamura and Yuka Nakamura having a Furo scene. Later on, Yusuke Yamamoto bathes in a hospital's Public Bath and Rika and Yuka show up in nurse uniforms to help bathe him but end up losing their clothing during it and eventually both just join him naked in the Undermount Bathtub. Later on, Yusuke helps Yuka bathe elders. 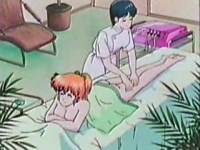 Anime version of the massage scene

The bath scenes in this chapter are exclusive to the manga and were not adapted in the anime series. Rika's Oil Massage scene at the end of the chapter however was adapted at the end of the first episode with the difference being that she is covered with a Green Towel rather than being completely naked like in the manga. 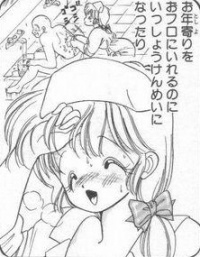 In chapter 5, Yuka Nakamura flashes back to this scene.