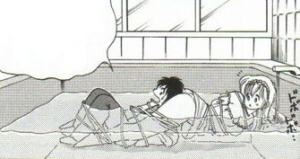 While cleaning the house, Rika Nakamura shows up completely naked and completely covered with Soap and has Yusuke Yamamoto use the soap on her body to help clean until she ends up naked. Afterwards Yusuke helps Yuka Nakamura clean the Ofuro but they both fall over into the Drop-In Bathtub and get tangled into a cord which turns the faucet on gets the Bath Running. They end up Clothed Bathing and Yuka falls unconscious.

In chapter 5, Yuka Nakamura flashes back to this scene through Recap Footage. 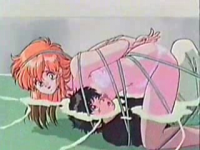 This scene was adapted into the 1st episode of the 1+2=Paradise OVA series.