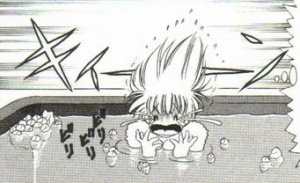 Yuka Nakamura takes an Ice Bath in a Drop-In Bathtub.