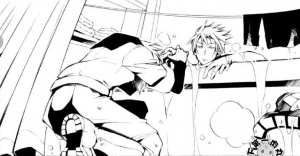 07-Ghost chapter 60 is the fifth bathing scene in the 07-Ghost manga series.

A colored illustration that appears before the cover shows Frau drying off with a White Towel after an Off Screen Shower while Teito Klein, Capella and Burupya are having a shower in a Shower Stall right behind him.

In the chapter's story, Frau has a Clothed Bath in a Clawfoot Bathtub and later strips his clothes off for the rest of his bath. Teito Klein gets mad at him and wants him to hurry up and finish so he can have a turn in the bath.

This chapter was compiled into the tenth manga volume. The original serialization of the chapter in Monthly Comic Zero Sum was released sometime before August 25th, 2010.