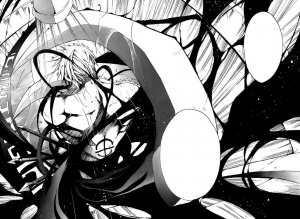 07-Ghost chapter 36 is the third bathing scene in the 07-Ghost manga series.

Frau takes a Shower. After getting out and wearing a White Towel, Teito Klein who is wearing a towel is chasing Capella to get him to take a Bath but he doesn't want to.

This chapter was compiled into the seventh manga volume. The original serialization of the chapter in Monthly Comic Zero Sum was released sometime before November 25th, 2008.

"When I take a bath, the warmth seeps in and stays for an hour or so."
~Frau