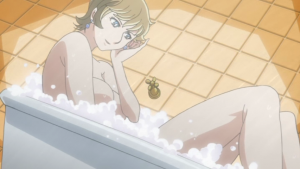 Mylene Hoffman is shown in her apartment on Christmas eve taking a Bubble Bath in a Flat Bathtub while having her Shower run on her. She ends up answering a call from her boss Number Zero asking her for her to report for duty. She then turns the shower off and gets out of the tub covered with soap suds and leaves the bathroom wearing a blue Bathrobe.

This scene does not happen in the manga and is anime original.