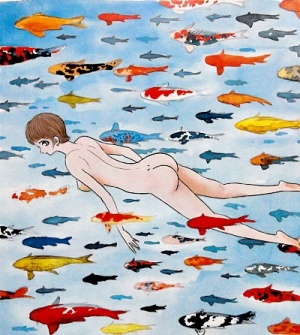 009-1 Digital Collection Volume 5 Cover is a bathing scene illustration that was used for the cover of the 5th volume of the digital release of the 009-1 manga series.

Mylene Hoffman is shown Skinny Dipping in the Ocean alongside a bunch of fish.

A full sized version of this image appeared in the Shotaro Ishinomori artbook known as Show Girl released on September 25th, 2014.

This illustration was made before 1998 since Shotaro Ishinomori had already passed away by the time any known media released that used this image. It was on the 5th and final volume of the digital release for the 009-1 manga series which was released on July 25th, 2014.