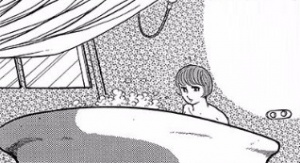 This specific chapter was adapted into the special episode of the 009-1 anime series known as episode 9.5 titled R&B but unfortunately the bath scene remained exclusive to the manga and was skipped in the anime.

This chapter was released in Weekly Manga Action on September 25th, 1969.